Why is there a Need for a…

The Best Canned Ham Recipes Ever

What gloves should you use to renovate…

Who is Bill Burr, and How Did…

Know about High Cholesterol – Symptoms, and…

The pancreas is an elongated glandular organ, about 18-20 cm long, located deep in the abdomen, between the stomach and the spine. This article you can know about what causes pancreatic cancer?

It is divided into three parts: the largest is called the head, and is in close contact with the duodenum. The central body, and the thinner part, which extends to the spleen. Its called the tail. The pancreas produces several very important hormones, including insulin and glucagon (which regulate the level of sugar in the blood). Various enzymes (for example, trypsin) which, are transported by the pancreatic ducts in the intestine, contribute to digestion and absorption of nutrients.

Pancreatic cancer occurs when some cells, in most cases, the type of ductal cells, multiply out of control.

The pathologist Aldo Scarpa talks about pancreatic tumors and the latest research results on this pathology.

How widespread it is

In 2020, approximately 13,7000 new cases were estimated in the USA, equal to 4 percent of all newly diagnosed cancers between males and females.

For many years there has been a greater prevalence of this tumor in men, probably due to their greater consumption of cigarettes than women. Since smoking is an important risk factor. Today, women smoke as much and more than men, and for this reason. Pancreatic cancer is among the five most frequent cancers in women over 70 years of age (in fourth place, with 5 percent of cases).

Who is at risk

The people most at risk are those who are in the age group between 50 and 80 years: pancreatic cancer is very rare among those under 40 years of age.

Smokers have a risk that is approximately three times higher than those who do not smoke.

Other risk factors, although not yet clear in the details, are type 2 diabetes (that is not dependent on insulin, which usually occurs after 45 years of age) and some rare genetic diseases such as von syndrome Hippel-Lindau. As well as some occupational exposures to solvents of industrial and agricultural use and derivative products of petroleum refining.

The presence in the family of cases of pancreatic or breast or colon cancer constitutes an additional risk factor, generally attributable to specific hereditary genetic mutations, which have a very important role in the development of the neoplasm. Finally, being a fundamental organ for digestion, diet also plays an important role: a diet rich in animal fats and proteins seems to do linked to an increased risk.

About 70 percent of pancreatic cancers develop in the head of the organ, in most cases originating in the ducts that carry digestive enzymes. This neoplasm takes the name of ductal adenocarcinoma of the pancreas, a name that indicates precisely the origin of the neoplasm from the ductal tree. In second place are neuroendocrine tumors, which originate from the cells of the islands of Langerhans. The structures of the pancreas responsible for hormone secretion. 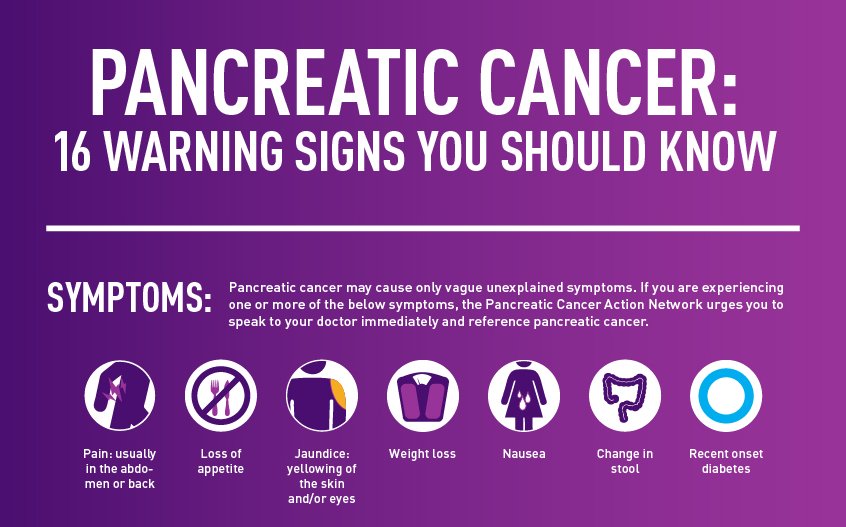 Unfortunately, early-stage pancreatic cancer does not give any particular signs, and even when they are present. They are rather vague disorders, which can do misinterpreted by both patients and doctors. For these reasons, the diagnosis is often made when the disease is already extensive.

Clearer symptoms (variable depending on the area of ​​the pancreas where cancer started) appear when the tumor has started to spread to nearby organs or has blocked the bile ducts.

Weight loss and appetite, jaundice (yellowing of the eyes and skin), pain in the upper abdomen or back, weakness, nausea, or vomiting can thus occur. A percentage of patients ranging from 10 to 20 percent can also remain affected by diabetes.

Several factors have been identified that may increase the risk of getting pancreatic cancer, but it is impossible to identify a single cause in a single patient.

The main risk factors for the onset of this disease are:

However, having two or more close relatives of the same branch of the family. Who has had pancreatic cancer? Hereditary breast or colorectal cancer may indicate that other people in the same family also have a higher risk of developing the disease. In these cases, it is useful to contact centers with experience in pancreatic pathology who may recommend performing control tests (screening).

Screening tests do not prevent the disease, but can help identify precancerous lesions that could develop into cancer; moreover, diagnosing the disease at an early stage can increase the chances of successful treatment.

Screening can imply genetic or diagnostic. Which, in the case of pancreatic cancer, is not reasonable. The diagnostic screening of hereditary diseases aims to recognize. The diseases early and to encourage the surveillance of subjects at higher risk of developing pancreatic cancer. However, a familiar very heavy it can remain associated with unrecognizable or still unknown genetic mutations. In these cases, however, diagnostic screening can obtain used to identify precancerous lesions (often cystic tumors). To treat them before they develop into cancer or to identify the tumor when it is in the initial phase. This is how you understand what you should do if you discover that you have a genetic defect that considerably increases the risk of developing pancreatic cancer.

Effective prevention is difficult to recommend, as not all causes of pancreatic cancer are known. It is undoubtedly important not to smoke and to follow a diet rich in fruit and vegetables and low in alcohol. People who have other cases of pancreatic cancer in the family can undergo periodic checks on the functionality of the pancreas. Liver and intestines, especially after the age of 50.

When there is a suspicion of pancreatic cancer, several tests can do done to check if the doubt is well-founded. The most modern forms of computed tomography(spiral or helical) can detect pancreatic tumors and the possible spread to lymph nodes, liver, and bile ducts.

Another important examination is the ultrasound examination. Both external, of the abdomen, and internal, carried out endoscopically through the stomach and duodenum.

To do this, three different tests can used. Endoscopic retrograde cholangiopancreatography (ERCP), percutaneous transhepatic cholangiography, and magnetic cholangioresonance. However, it does not allow a biopsy to look for the presence of cancer cells, which is instead possible with both other methods.

Furthermore, pancreatic cancer patients sometimes have an increase in the levels of a protein called CA-19-9. This, however, is not always present and can also stay elevated due to other diseases or inflammation of the biliary tract. It is good to deepen the investigations.

Unfortunately, cancer cells that grow in the pancreas spread very easily to nearby lymph nodes and other organs such as the liver and lungs. They can spread to the abdomen giving rise to the so-called “peritoneal carcinosis.”

In addition, pancreatic cancer shows no signs of self until it has reached a significant size or obstructs the bile ducts or important vessels. This, together with the position and relationships of the organ with the other organs of the abdomen. Makes pancreatic cancer one of the most difficult forms of cancer to diagnose in good time and, therefore, to cure.

ow to cure it

A small percentage of pancreatic cancer patients (about 20 percent, that is, one patient out of five) is identified when the tumor is still localized and can therefore undergo a surgical removal that has some chance of success. The best results are obtained in the centers specialized in the treatment of these tumors.

Surgery is different depending on the location of the tumor, for tumors in the head of the pancreas. Duodenocephalopancreasectomy is indicated, which involves the removal of the pancreatic head, the duodenum. The last part of the stomach and the biliary tract in bulk. In the case of tumors of the body and tail.

After surgery, it may remain necessary to perform chemotherapy, which is also the only weapon available, along with radiation therapy, for tumors that are not operable. In selected cases, chemotherapy can also used before surgery—the so-called neo-adjuvant.

Given the severity of this condition, research is actively seeking a solution. The commitment of the International Consortium on the Genome of Cancer. In which Italian researchers supported by AIRC also participate. This new information has made it possible to identify different pancreatic. The data produced also stimulated intense research to identify early diagnostic markers of the subjects most at risk. At the moment, however, these are only experimental findings.

Among them, the tyrosine kinase inhibitors such as erlotinib. Some trials are underway with drugs capable of potentiating the immune system’s action against the tumor. The therapies available today in the clinic are not currently resolving for all patients. But some become shown to extend life expectancy for several patients.

Read More: Muscle pain What is a myofascial syndrome

How can you earn great bonuses and great services at CasinoChan

A guide to registering your business in the U.S.A.

Ringing In One Ear

Exercise For Lower Back